Quabbin Valley Pro Musica presents To Love and Harmony celebrating their return to singing after a pandemic-imposed hiatus of more than two years. The concert begins with three brief songs celebrating the joys of making music together. The remainder of program includes secular and sacred music from the 17th, 18th, and 19th centuries, including Six English Psalms by the great Franz-Joseph Haydn, four Elizabethan madrigals on the perils of love, and a Mass by L.B. Est, a 19th century Austrian composer whose works are just beginning to be heard widely.

QVPM is a chorus open to singers of all ages, genders, and musical backgrounds. Since 1993, it has been the resident chorus of the 1794 Meetinghouse in New Salem. Led by Music Director Geoffrey Hudson and collaborative pianist Judy Johnson, QVPM comprises 25-35 singers drawn from across the North Quabbin and Pioneer Valley regions; this fall’s members come from ten towns. The singers are gifted amateurs who perform quality choral music from many genres. QVPM meets on Monday nights in New Salem, and typically performs concerts in January and June. Please let us know if you are interested in joining the chorus; the next season will open in February.

Geoffrey Hudson has directed Quabbin Valley Pro Musica since 2017. He also directs the chorus at Greenwood Music Camp’s junior division and serves as music director of Pioneer Valley Cappella in Northampton. He previously directed QVPM from 2001-2007. A composer as well as conductor, his works have been performed across the U.S. and in Europe. His eco-oratorio, A Passion for the Planet, was premiered in June 2019 by the Illuminati Vocal Arts Ensemble. CONCORA, Connecticut’s leading professional chorus, will perform the Passion in Hartford in April 2023.

The Quartet Project, Hudson’s six-volume collection of graduated string quartets, was published in 2015, accompanied by a CD featuring performances by the Chiara, Parker, Miro, Brooklyn Rider, Jupiter, Borromeo, and Apple Hill quartets. In 2017, selections from The Quartet Project were featured at the International Society for Contemporary Music’s “World New Music Days” in Vancouver. He received his undergraduate degrees at Oberlin College, where he studied American history and composition (with Richard Hoffmann), and earned a Master’s in composition at New England Conservatory, where his principal teacher was Malcolm Peyton.

Judy Johnson has been the Collaborative Pianist for the Quabbin Valley Pro Musica since 2011. She has also collaborated with amateur music theater groups, school choirs and shows, church soloists and choirs of all ages, and community choruses in California, Australia and New Hampshire.

Judy ran an independent piano and voice studio for over twenty-five years, and is a former president of the New Hampshire Music Teachers Association. She has accompanied and directed church choirs in Australia and New Hampshire, and is currently the Music Director at Mission Covenant Church in Orange, MA. Judy was the founding director of the Nashua Choral Ensemble, an ambassador group from the then Nashua Symphony Choral Society (now the Symphony NH Chorus), and led this group for eight years. Judy received a Bachelor of Arts in Music from California State University, Sacramento and did graduate studies at Melbourne University in Australia, UMass Dartmouth, UNH Durham and Westminster Choir College in Princeton, New Jersey. 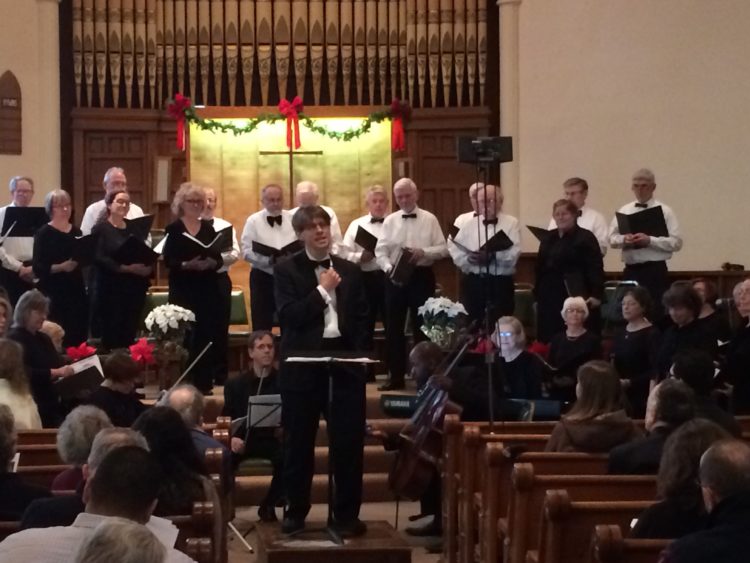 Atholl Musicale, QVPM’s precursor, was created by Mark Wright in 1988. In 1993 it was renamed Quabbin Valley Pro Musica when it became the resident chorus of the newly formed 1794 Meetinghouse, Inc. Because renovations on the historic Meetinghouse were not yet complete, the first concerts were held in the New Salem’s Central Congregational Church. The first Music Director was Gail Ares-Laraba; she had conducted the Atholl Musicale and continued with the early QVPM. Mark Wright managed the early choir and produced its concerts.