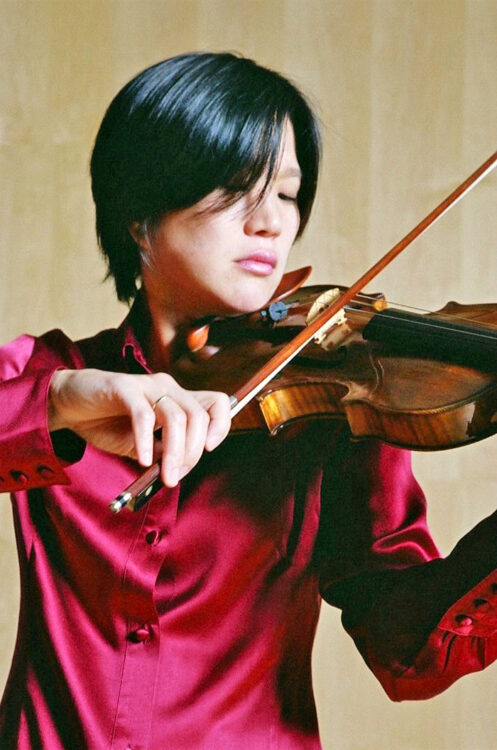 Elizabeth Chang, violinist, enjoys a multi-faceted career as performer, teacher, and arts administrator. Her performing career has taken her to more than twenty countries and her chamber music appearances have included collaborations with many of today’s leading artists. She is currently professor of violin at the University of Massachusetts Amherst and a member of the violin and viola faculties of the Pre-College Division of the Juilliard School. She was recently appointed Artistic Director of Green Mountain Chamber Music Festival, succeeding founder Kevin Lawrence.

Ms. Chang is Artistic Director and co-founder of the Lighthouse Chamber Players (Cape Cod) as well as co-founder and co-organizer of the Five College New Music Festival, the UMass Amherst Bach Festival and Symposium and Musique de Chambre en Val Lamartinien (Burgundy, France). She also co-founded the NYU Intensive Quartet Workshop in the summer of 2002 and founded and directed The School for Strings Intensive Chamber Music Workshop from 2003-2007. With the goal of engaging students in the performance of newly commissioned music, she created the Violin Duo Project as an offshoot of the Five College New Music Festival. Ms. Chang is also founding co-director of Long River Concerts, which was scheduled to launch in spring of 2020 but was delayed due to Covid. In Fall 2020, she launched the Zoom speaker series “Music, Community Engagement, and Social Action.”

Prior to her appointment to UMass, Ms. Chang toured and recorded extensively with the Orchestra of St. Luke’s and the Orpheus Chamber Orchestra and performed with a number of new music groups based in New York City. She was formerly an Artist Faculty member of New York University and of the Mason Gross School of the Arts at Rutgers University; for many years she also served as head of chamber music and violin faculty member at The School for Strings and as a member of the faculty of the Harlem School of the Arts. Her latest recording, Transformations, was released in April, 2021 with works by Leon Kirchner, Roger Sessions, and Arnold Schoenberg and accompanied by pianist Steven Beck and cellist Alberto Parrini.

Playing early keyboard instruments and studies on historical performance practice play a significant role in Mr. Sun’s musical activities. Important engagements include critically acclaimed appearances with the American Classical Orchestra and The Chamber Music Society of Lincoln Center, and recitals at the Westfield Center for Historical Keyboard Studies at the Cornell University and at The Juilliard School. In 2014, he performed a series of recitals commemorating the tricentennial of Carl Philipp Emanuel Bach’s birth on clavichord, harpsichord, and fortepiano. He has studied harpsichord with Lionel Party and fortepiano with Malcolm Bilson and Audrey Axinn.

Hailed from Yantai, China, he received the Bachelor’s and Master’s degrees from The Juilliard School. He continues his studies at Juilliard as a doctoral candidate under the tutelage of Yoheved Kaplinsky and Stephen Hough. His other mentors include pianists Malcolm Bilson, Richard Goode, Robert Levin, and harpsichordist Lionel Party. His devotion to the art of composition led him to study with the composer Philip Lasser. Mr. Sun is Assistant Professor of Music and Associate Chair for Performance Activities at Smith College